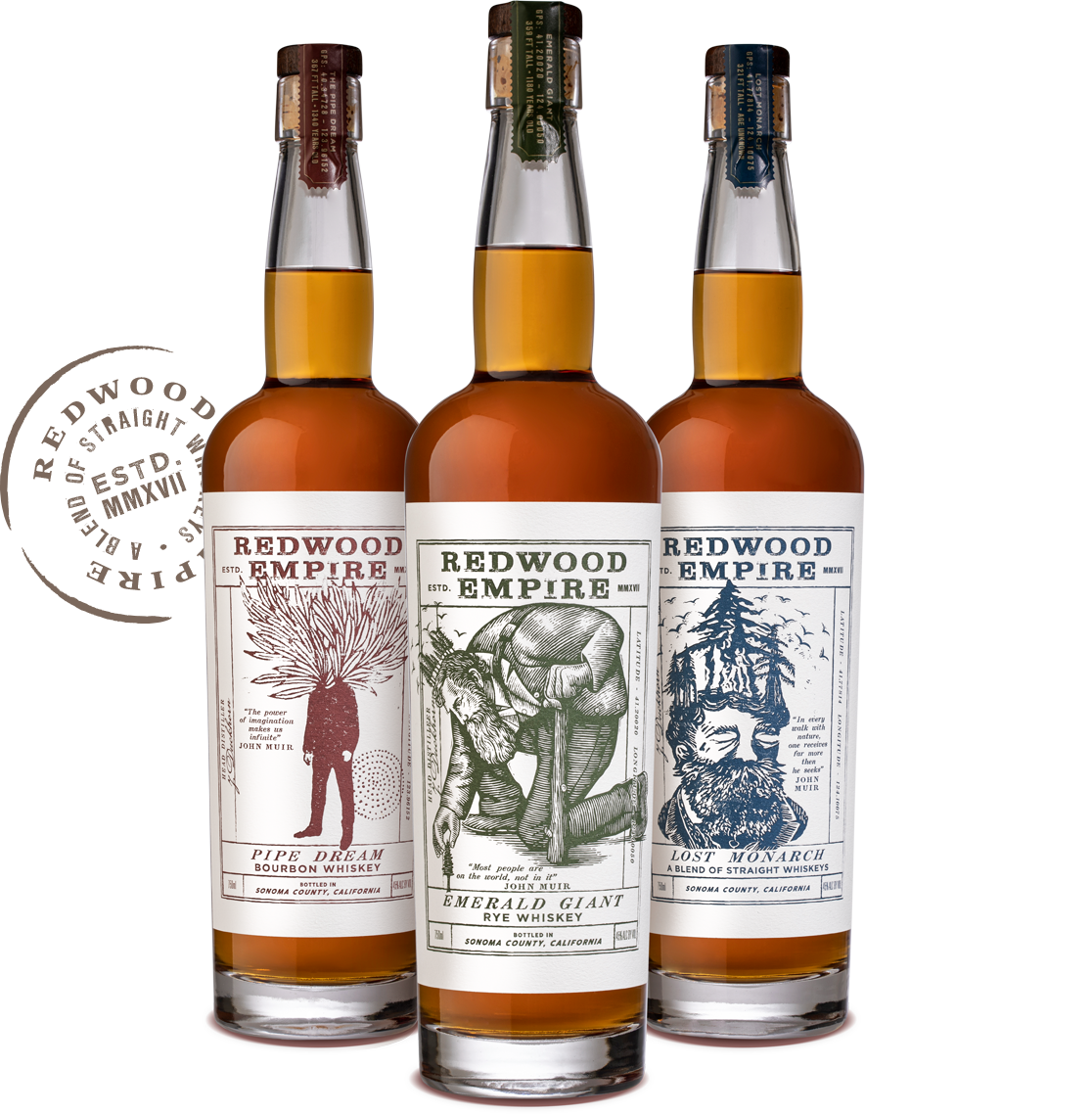 Up and coming California based craft distillery, Redwood Empire, is making a big mark in the whiskey world with three new, distinct offerings. Following in the footsteps of companies like High West and Barrel Craft Spirits, Redwood is sourcing and blending whiskey, but they are also beginning to incorporate some of their own product as well. According to Redwood Empire, “The Northern California Coast is a unique place, one of the few in the world where giant redwood trees grow. A place of inspiration and renewal. This same cool climate makes it a perfect place to produce sublime whiskey. Aging barrels here allows for a slow and even extraction of flavor, producing a whiskey of exceptional balance and complexity.”

Lets dive right in to this Redwood Empire Whiskey Review and discuss their three main offerings, as well as a single barrel finished whiskey in their portfolio.

“Named after the world’s largest coastal Redwood, Lost Monarch whiskey has a name to live up to. An award winning bourbon-rye blend with an exceptional balance of sweetness and spice. The perfect choice for those who just can’t decide between rye or bourbon, we call it “the best of both worlds.”

Age: Blend of 5 to 12 year old Bourbon & 3 to 5 yr old Rye Whiskey including a portion of house-distilled Rye

Nose: Initially, clove, nutmeg, and cinnamon are followed by an almost orange creamsicle note. Slight butterscotch and orange peel show through more as the whiskey opens up. That 95/5 rye spice hits you on the front of the nose. A slight black pepper shows up as well. This noses much hotter than 90 proof. That’s the rye for ya!

Palate: Vanilla and caramel show up first on the front of the palate, nearly tricking me into thinking this is a bourbon. A very nice mesh of corn and rye sweetness show through, but one note is not more dominant than another. Quite well balanced for having such a youthful rye in the expression. In the center to the back of the palate, the spice starts to take over. Earthy, peppery rye notes are emitted on the back of the tongue, and fade into an ever so slight oak note. Nice flavor overall, but it doesn’t leave that tingle on the tongue I love in my rye or high rye whiskeys.

Medium mouthfeel and finish overall. Nothing overly complex, but nothing off putting or concerning either. A solid, but relatively quick fading of flavors leads me to feel that this whiskey would be excellent if tried at barrel strength.

This is actually really good stuff. At a $30 price point there’s no way you should pass on this if you haven’t tried it. I’m very impressed with the flavors they are able to get out of the whiskey, even at a relatively young age (at least for the rye). Given how well this whiskey is already blended, I really look forward to what is coming up in the future from them.

Maximum Price I Would Pay: $40

“Named after the fastest growing Redwood in the world, Emerald Giant is a fan favorite in the Rye world. We started with a mash-bill of 95% premium rye and aged it for over 3 years in new charred oak barrels. Spicy with an exceptionally smooth finish, it is a great choice in your classic whiskey cocktails.”

Once again that 95/5 pops right through into the nose. Immediate rye spice, pepper, cinnamon and slight brown sugar round out most of what’s in the glass. Orange, lemon and citrus peel show up, but they are dominated by that rye punch. Once again this noses 100 Proof+ as numerous rye whiskeys tend to do.

Classic 95/5 rye notes show up on the palate. Front of the tongue gives you a punch of baking spices and an almost honey sweetness. Immediately my mind takes me to Bulleit Rye, but on memory alone this has a better overall drinking experience. This drinks much more balanced than I remember with the Bulleit. I wish I had a bottle I could compare right now. The citrus and peppery rye flavors hold true on the palate as they did on the nose. This tastes much better than I remember the first time I had it.

Pretty nice mouth coating and medium finish. Rye whiskeys tend to give me a decent mouthfeel in general due to that extra bite and spice that typically shows up. Not the best lingering flavor on the back of the palate, but by no means is it offputting.

This is a pretty typical 95/5 rye. Very solid offering and priced well for what you’re getting in the bottle. I think this is priced right where it should be. I am curious to see what their own rye will taste like on its own once it has reached maturity. Nothing wrong with some good ole’ MGP rye, I just like to see what craft distilleries products can be. Given the choice between this and Bulleit Rye, I will be reaching for this off the shelf.

Maximum Price I Would Pay: $30

“Named for the 14th tallest tree on the planet, Pipe Dream is our first Bourbon whiskey. Pipe Dream Bourbon is made from a high corn mash-bill and blended from barrels aged between four and twelve years. Smooth and complex, it is a true sipping whiskey.”

Coming off the back of Lost Monarch, this nose is falling a little flat. That grainy, corn sweetness shows through, giving off that impression of youthful whiskey. Vanilla, caramel, and maybe a little bit of maple brown sugar are noted, but that’s about it. Pretty one-dimensional on initial nose.

Again that corn sweetness shows through, and that grainy, almost ethanol burn shows up on center and back of the palate. The predominant note in this is almost a creamed corn with very few extra bourbon notes making themselves known. Most definitely not a bad whiskey, but there’s nothing that really stands out or makes me want to go back for a second glass or even a second sip.

Short to medium finish overall. Almost no mouth coating and very little finish on the back of the tongue. My favorite part of this whiskey is the front of the palate where it leaves a slight tingle, but the rest of the finish dissipates very quickly.

Again, not a bad offering from Redwood Empire, just nothing I would reach for on a regular basis. I believe a lot of those four year barrels are showing through on this expression. Pipe Dream has a solid flavor profile, and the flavors that are there will be quite good with a few more years in the barrel. Once again, $30 is not much of a gamble if curiosity gets the best of you, but if it’s between this or Lost Monarch, I’m going for the latter nine times out of ten.

Maximum Price I Would Pay: $30

“Haystack Needle is Redwood Empire’s barrel program. This release is a 12 yr old Cask Strength whiskey sourced from MGP and finished in Cabernet Sauvignon wine casks. Currently the unfinished version of this whiskey is used in two of Redwood Empire’s main lineup, Pipe Dream and Lost Monarch.” Other Haystack Single Barrels include a Chardonnay and Port cask finish as well.

**It is worth noting the color on this whiskey is an almost Amber, with a dark maroon tint to it. That wine barrel is definitely showing through**

Wow, MGP cask strength bourbon is truly something special. 90% of the offerings I have had from MGP at or near barrel proof have smelled wonderful, and this is no exception. Classic MGP sweetness with an extra layer of dark fruit added in. An almost blueberry jam note comes through along with raisin, plum and dried apricot showing up. A good amount of burn rises up to the nostrils, but it is a wonderful aroma that fills the lungs. Baking spices and pepper notes take over next. This smells like it’s going to be a spicy dram.

Great front of the palate. So much sweetness along with a lot of spiciness, which is just what I like in a good bourbon. Front of the palate almost gives me a potpourri-like taste that your grandma would have around Christmas time. Lots of Christmas baking spices, almost like a holiday fruit cake. Center of the palate, even more spice settles in as the oak starts to make itself known. This bourbon is consistently sweet throughout the whole experience, but the back of the tongue starts to give me a little bit of a dry red wine note. Obviously this is from the barrel, but that’s where I can tell most it’s a finished whiskey.

After about 15 minutes in the glass, more of that drying Cabernet barrel is showing up on all parts of the tongue.

Front, center and back of the palate all have a great mouth feel. Nice coating throughout the whole mouth, leaving my taste buds salivating, wanting more. Once again the back of the palate is beginning to get dried out from that Cabernet barrel. I personally get very turned off by any whiskey that dries me out at all. I love a nice, juicy, creamy finish in my bourbon.

It’s really hard to mess up MGP cask strength bourbon. This was a very nice pour and I am very glad I was able to try it. It is very easy to ruin a whiskey with poor blending or choosing the wrong finishes. Redwood definitely didn’t do that by any means. This is a great whiskey and the finishing added an extra layer of depth and complexity. However, at the $100 price point, it is going to be very difficult to pull the trigger when I know what whiskeys I can get at the $60 price point. Keep in mind these are single barrel offerings, and Redwood only got about 120 bottles per barrel with a total of 10 barrels. I don’t consider myself a big finished bourbon fan. If you are someone who loves finished whiskey, this bourbon will not disappoint.

Maximum Price I Would Pay: $80

These samples were provided by a viewer, and not from Redwood Empire. I am grateful to be given the opportunity to provide my own honest and unbiased opinions on these whiskeys.